The Birth of Jesus Christ, May Peace and Blessings Be Upon Him (PBBUH) And the Common teachings between Christianity and Islam

The Birth of Jesus Christ, May Peace and Blessings Be Upon Him (PBBUH)

And the Common teachings between Christianity and Islam 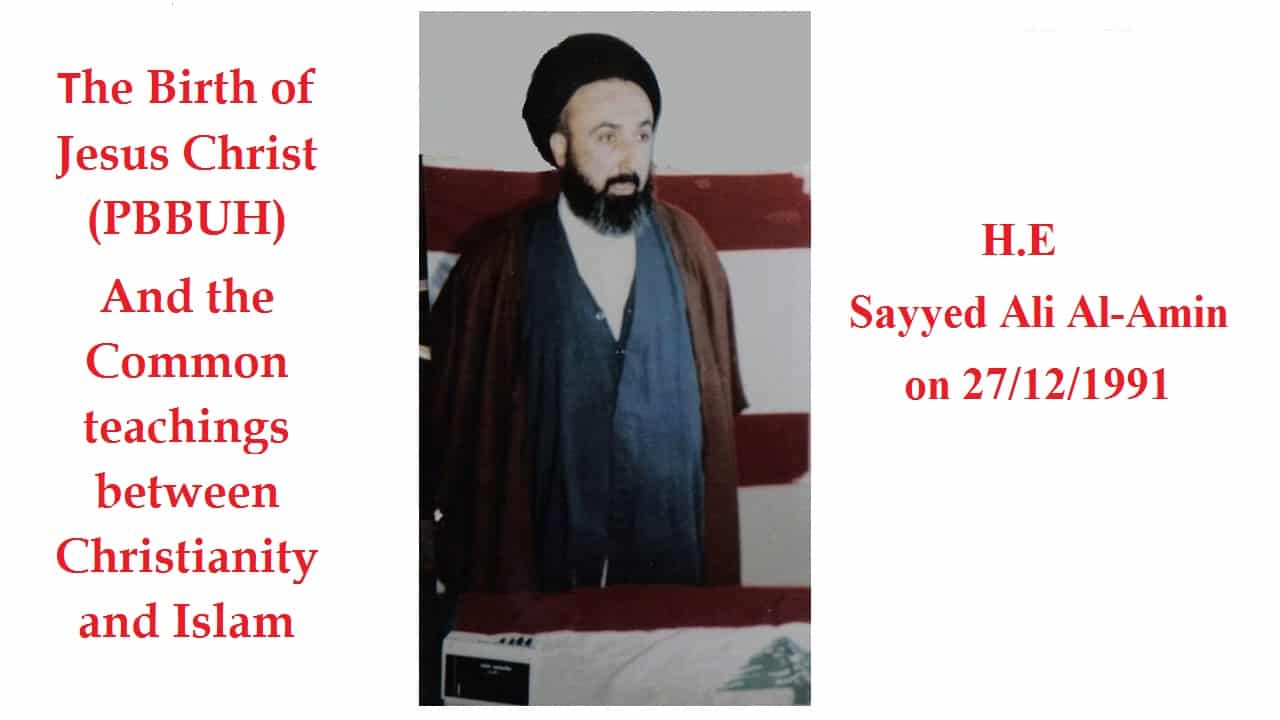 In The name of Allah the Most Merciful, the Most Compassionate, and Praise be to Him.

And Allah’s blessings and peace be on all Prophets and Messengers, and on all His righteous human beings whom all are good as companions.

My sisters and brothers, Allah’s peace, mercy, and blessings be upon you all

A motivating factor regarding our celebration of the miracle birth of Jesus Christ the Savior is linked to its transformative impact which was one among other events that affected the historical trajectory of an established society. The historical trend of his time was developing into darkness and oppression, but his miracle birth (peace be upon him and the prophets of God) marked its conclusion and rendered the opening of a new phase in the history of humanity emergent from love, freedom and justice.

The social order prior to the birth of Jesus Christ was known by the persistence of privileges and the instrumentalization of religion and its aims. A group of people subordinated religion to self-centered interests, while emasculating its goals for their own ends. Jesus Christ appeared to end this reality by affirming that all religion belongs to God, and all people are equal in front the law of God. In doing so, he was commanded and committed to continue the noble cause of the prophets and messengers before him, among which was the journey of prophet Moses in the people of Israel, Jesus says in the Gospel: (Do not think that I have come to abolish the law or the Prophets, I have not come to abolish them but to fulfill them)

Jesus Christ carried on with the noble cause initiated by the Prophets, a cause which rests on engendering the human being who is connected to the Almighty God. This monotheistic human contributes to the unification of human journey on earth.

In light of reading the texts of the holy scriptures and books; the Torah, the Bible, and the Holy Quran, we reach an understanding that the prophets and messengers are all graduates of a single school. Their goals and teachings converge upon developing the model of a perfect human being because God of all heavens is perfect. Therefore, the common goal of all prophets is directed towards the perfection of mankind on the grounds of ethical principles and universal values. In this way, people become a unified unit, without any potential barriers and blocks that divide them: as said in holy Qu’ran : (Mankind was one nation, then Allah sent prophets giving good news and giving warnings and He sent with them the law/the book with justice so that book can make decisions between them in whatever disagreement they have among themselves).

Indeed, the prophets were sent to settle the seeds and causes of disputes for the sake of removing and reducing them, and not to entrench and widen them. Their concern was to repel those causes and reintegrate all people in one nation, as God wanted.

This unity of teachings and principles that we see in the Bible, the Holy Quran, and the Old Testament, reveals the shared and oneness source of the books, and the oneness of the direction and the purpose. In view of that, these teachings that embark on elevating the humanity of the human are essentially identical in the books of Allah (the Bible and the Quran).

But here we emphasize the unity of the teachings because intolerance is a manifestation of ignorance and lack of knowledge.

There is no contradiction in the teachings; however there is integration in the divine teachings of the prophets which go hand in hand with the stages of human consciousness.

I will read to you some passages from the Bible to compare them to some verses from the Holy Quran and with some sayings of Prophet Muhammad (PBBUH).

In the following text from the Bible, Jesus Christ (PBBUH) says: (Do not think that I have come to abolish the Law or the Prophets, I have not come to abolish but to fulfill).

Compare this text from the Bible to the famous and well-known Hadith of the Prophet Muhammad (PBBUH): (I was sent to complete the best of morals).

In other verses of Jesus Christ (PBBUH) in the Gospel:

Read with me another Hadith by the Prophet (PBBUH):

In the teachings of Jesus Christ in the Bible that came to complement the law, Jesus Christ tells them: (You have heard that the ancients were told, ‘you shall not commit murder ‘ and ‘Whoever commits murder shall be liable to the court.’ “But I say to you that everyone who is angry with his brother shall be guilty before the court; and whoever says to his brother, ‘You good-for-nothing,’ shall be guilty before the supreme court; and whoever says, ‘You fool,’ shall be guilty enough to go into the fiery hell) – this is in the teachings of Jesus Christ in the Gospel of Matthew and the Gospel of John and the other Gospels. (Therefore if you are presenting your offering at the altar, and there remember that your brother has something against you, leave your offering there before the altar and go; first be reconciled to your brother, and then come and present your offering). This is also one of the teachings of the Bible.

From the teachings of the Holy Quran, in the Bible there is (If you call someone an idiot or curse them, you deserve to go hell.) and (“Therefore if you are presenting your offering at the altar, and there remember that your brother has something against you, leave your offering there before the altar and go; first be reconciled to your brother, and then come and present your offering), because your gift is not accepted if you are harmful to your brother, and if you owe something to your brother, in the Qur’an: (Nor defame nor be sarcastic to each other, nor call each other by (offensive) nicknames: Ill-seeming is a name connoting wickedness, (to be used of one) after he has believed). And in the Holy Quran: (And don’t gossip about each. Would any of you like to eat the flesh of his dead brother? Nay, ye would abhor it...).

(But I say to you that everyone who is angry with his brother will be liable to judgment;… And whosoever shall say, Thou Fool, shall be in danger of hell fire) is also in the teachings of Jesus Christ (PBBUH).

In the teachings of the Holy Quran, if someone mentions his brother with anything bad and he is not present, he is also to be guilty of haram and a doer of a sin that deserves hell.

There is a compliment between these teachings and these laws. (Indeed Believers are brothers, so make peace between your brothers), the Qu’ran.

In the Gospel, there is a focus on fraternity among human beings, as is the emphasis on this aspect in the Holy Quran.

For religious freedom in the Bible and the Holy Qur’an, Jesus Christ says: (If anyone hears my words but does not keep them, I do not judge that person. For I did not come to judge the world, but to save the world.).

What does the Holy Qur’an say? (There is no compulsion in religion; truly the right way has become clear from the wrong).

These are some snapshots, and unless we have studied the Bible deeply and studied the Holy Quran the same way, we would have ended up with a complementary culture and not with a culture of contradiction and negation.

In some teachings, there is: (and if you salute your brethren only, what do you do more than others? Do not even the publicans so?) Who does a good deed is the one who do it with his brothers only?  No gratitude to him, but the gratitude is to do it with other than those he loves.

In Islam: (visit who stops visiting you, and forgive those who wronged you and give to those who forbid you), (a Muslim is who people are kept away from the harm of his hands and tongue); “people” and not only the Muslim. These are teachings for building a unifying society on earth.

So from here, I call, as I said to some of the fathers and parents that if we want to build a homeland of familiarity, love and affection, we have to know and study each other so well, we have to set up an institute where we can study Islam and Christianity altogether to go out to the community with one way of thought and one book and then we can build one homeland based on real integration and fusibility between Muslims and Christians.

In conclusion, I extend my congratulations to all Lebanese with sincere and heartfelt wishes praying that the memory of Christmas is a day of blessings and happiness for all Lebanese, Christians and Muslims.

I would also beseech God the Almighty to make it a day of salvation of our homeland “Lebanon” from all pains and sorrows, and a day of bringing unity back to its lands, and love to the hearts of its sons on the basis of co-existence among all its sons and sects.

In the memory of this happy birth of Jesus Christ the Savior (PBBUH), epitomized in his birth, his miracle mission from God and as a mercy of God to the human being, it is necessary to go back to the character of this occasion to learn some lessons and wisdoms that will be beneficial to humans and our homeland.

The commemoration of Christmas is by glorifying and sanctifying the Lord and thanking Him for his giving. It is by reviving family relations and building nations and it is also by competing for doing good deeds, helping the poor and alleviating the grief of the bereaved and the orphans who lost their parents in wars from which we gained nothing except things that only destroy what we have built from the efforts of grandparents and sons. It is a day of helping the weak, the poor, and the weakest one, that we all must help is Lebanon our homeland and this is how we can make it stronger and rise as a giant after lean years of wars.

*PBUH = Peace Be Upon Him